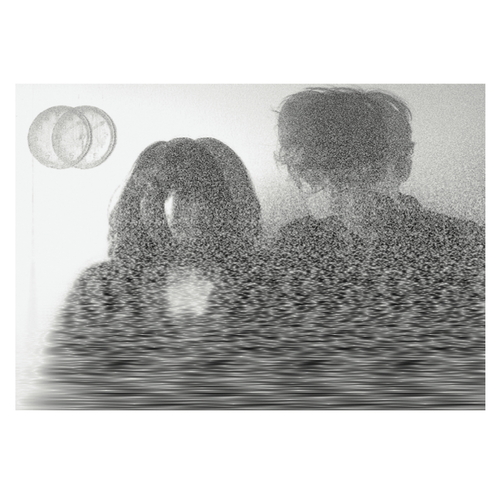 The five-track EP released on 12” vinyl, and available to download via Tip Top Recordings, features a set of intense, claustrophobic and therapeutic tracks that cover everything from love to heartache, mental breakdowns and insomnia.

Lead track and first single ‘We Never Sleep’, an upbeat yet claustrophobic dance track, is about relentless insomnia and bizarre sleeping patterns. The heart-wrenching ‘I Feel Warm’ follows, which is lyrically opaque with a swelling string section and acts as a contrast, if not a relief to the preceding track. Vocals switch female to male as BoB display a drummer-shorn creative freedom and individuality. Next is instrumental piece ‘Thue-Morse’ that attempts to put to music, a fractal binary sequence while ‘Mad Girl Love Song’ was inspired by the Sylvia Plath poem of the same name The EP closer, a six minute noisescape which is both deeply intimate and aggressive, ‘Paradise Syndrome’ is dark journey into loneliness, depression and guilt about one's own shortcomings. The 12” intro is a blast of otherworldly noise produced by sound-scanning the band’s self-produced cover art.

The Blue on Blue line up of Dee Sada (vocals/bass/electronics) – formerly D-bird in An Experiment On A Bird In The Air Pump - and Billy Steiger (vocals/guitar/electronics) share vocals and produced, engineered and recorded the EP themselves in their tailor-made Morgenrock Studios in Cable Street, East London. Using an array of custom-made instruments to create their own unique sound, the band is dedicated to pursuing the intricacies of sounds and music.

Having supported The Charlatans on their recent UK tour the duo played a mini-UK tour in September and launch the EP on October 31 with a special Rough Trade East in-store performance before heading to The Old Blue Last to support The Doldrums for Vice Magazine.

“Blue On Blue sound more artistically confident than ever before. 'We Never Sleep' and 'Paradise Syndrome' are hypnotic and sexy, with Dee Sada coming across like Lydia Lunch. 'I Feel Warm' finds Billy Steiger bobbing in a floatation tank, crooning out his relationship regrets to a lonesome Eno vibe until he's warmed up by John Cale's missing violin, while 'Mad Girl Love Song' lullabies us to sleep then feeds a gently militant distortion into our dreams. Avant rock with integrity? Whatever next!” Artrocker *****

“We Never Sleep: Intricate, spooky pop with an infectious hook” The Irish Times

“Blue on Blue retain the dark influences, though these new tracks have a different vibe to them, the angular edges softened in a night-time haze and then boosted by the arrival of increased electronic experimentation. The duo share the vocal responsibilities across a record that broadcasts the diversity of their influences, string sections sit alongside experiments in noise and the kind of electronic meanderings that you’d expect from something much more solidly in the dance spectrum.” Mint Magazine

“The four tracks work like a brooding Von Trier soundtrack in miniature, with the band delivering four mesmeric and moody ‘pop’ pieces that snake, groove and drone through infectious melody and dark distortion with both synths and guitars effortlessly – challenging pop music indeed. Dark Rock! Let’s await an alum with eager anticipation” Artrocker Radio (We Never Sleep – Playlist Track of the Month Nov)

“Impressive eponymous debut including the outstanding lead track 'We Never Sleep' - already a staple of the XFM playlist. Blue On Blue have hatched a very neat fusion of Coldwave and Shoegaze memes with their first record, honing a pop-focused yet subtly esoteric sound. 'We Never Sleep' eking a gap between James T Cotton's more munted jacks and the sexiest, darkest IDIB styles with an intricacy and style. Elsewhere they touch on opiated, bedsit-shimmer Shoegaze with 'I Feel Warm' and 'Mad Girl Love Song', besides the EP's other highlight, a drum machine killer called 'Paradise Syndrome' recalling Vazz or Cocteau Twins. Tip!” BOOMKAT

“‘We Never Sleep’ expertly marries a 606 type bassline and thumping beats with haunting female vocals to mash up a couple of disparate genres expertly. ‘I Feel Warm’ sounds like a woozy, exhausted Jesus and Mary Chain whilst on the flip ‘Mad Girl’ recalls Mazzy Star (them again) and This Mortal Coil. The closer ‘Paradise Syndrome’ has Young Marble Giants drum machine and bass lines fighting with Joy Division atmospherics. Overall a nice, forward thinking EP and a very promising start.” Norman Records ****

“A brilliant act…definitely a band to watch out for.” The Line of Best Fit

“The boy / girl guitarists could be Bobby Gillespie & Kim Deal…tremendous.” Drowned In Sound

"A band who quite literally sound like the Cocteau Twins playing alongside Veronica Falls, Blue on Blue are one the rarest things – a modern British shoegaze band who don’t suck." Spoonfed

“A funkier, clearer version of the XX. Languid, blissful and fuzzily warm” Some Of It Was True!